The check performed to the beginning of a turn goes wrong, and a Minotaur explodes and sinks by a fire.
The British fleet shoots down an L'Orient certainly, and if it did not make it surrender whether a subsequent ship of the line is also sunk depending on the case, it stopped as a result, changing.
Since the field of view by the side of the sea opened an L'Orient, direction was changed and a Franklin also changed direction corresponding to this.
In order that an L'Orient may add dealing to the Swiftsure which infiltrated newly.
A Franklin is for bombarding the land side at the ship of the line of the enemy who progresses. 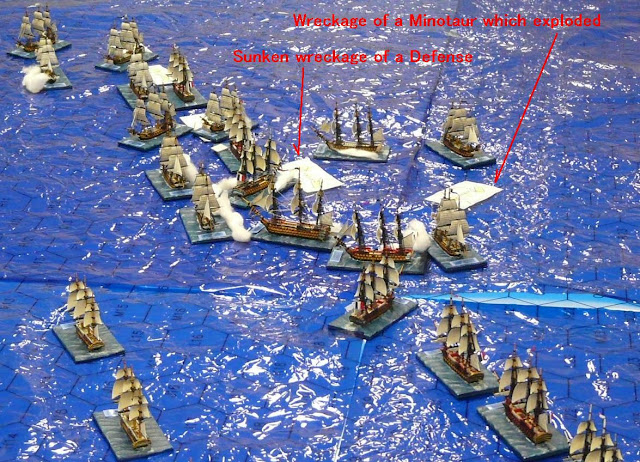 An L'Orient is having changed direction and has a position of a rake shot taken by the Goliath.
As a result, although an L'Orient will receive the severe blow which is not boiled till then, it was living and the offensive strength to an enemy did not spoil the bombardment power of 30 fire power(MAX fire power on a rule is 25) of the gunwale of one side so much.
Furthermore, the Defense of the British fleet which has mixed the exchange of gunfire intense so far is made in pieces, and sinks a hull. 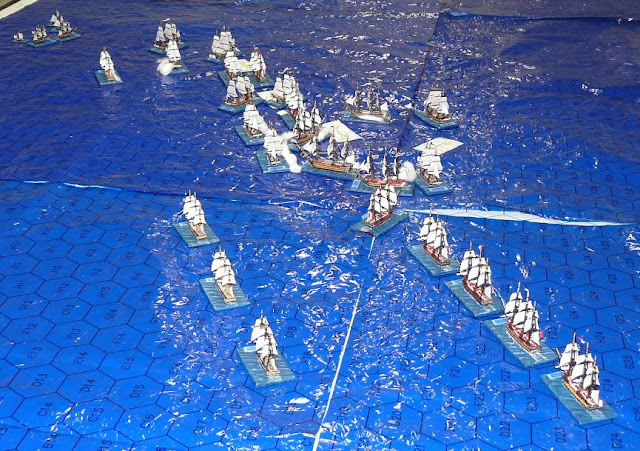 The Peuple Souverain of the France fleet which will be located in the head of the France fleet which now remains without surrendering was covered with a concentrated fire to a new type of a Leander, or the ship of the line of Britain which has moved forward.
As a result, a Peuple Souverain surrenders.
to be continues 12/14
投稿者 Unknown 時刻: 8:21 0 件のコメント:

Although the Minotaur which the fire broke out and has realized its fate pushed on toward an L'Orient only in about with an honorable death, a mast was not folded, and neither a wind nor wind force changed, but only 1 hex has moved forward each time for the breeze state.
In the meantime, an L'Orient and a Tonnant continued adding bombardment without tender-feeling forgiveness.

However, the British fleet which prepared the posture which puts an enemy ship from both the gunwales continued the tactics which move and shower bombardment over an enemy ship at passing each other.
When victory conditions deducted and carried out the score of the enemy ship surrendered & sunk and an ally warship and 150 point leads arose, it says that the side which attached the difference in the end of the turn wins, and at present, about 92 points, the British fleet was acquisition and the number of France armies was zero.

Even if one British army is sunk in flawlessness, a victory cannot be expected unless it drives even an L'Orient into sinking or surrender.
to be continues 11/14
投稿者 Unknown 時刻: 8:16 0 件のコメント:

14th turn :A fire and surrender

The Defense(74 guns) by the side of the sea which now is preceded rather than the inland side, and a Bellerophon(74 guns) moved forward passing through the side of an enemy ship.
By intensive bombardment of an enemy ship, a Defense damages a mast and it becomes impossible cruising it.
Furthermore, a Leander turns a rudder to the right and is reversed on it, and it is hidden in the space which the enemy ship sank and was made, and schemes for the rake shot on a Franklin(80 guns).
On the other hand, the France fleet projected the warship tail to the right according to the effect of the anchor with a spring which the Tonnant(80 guns) behind an L'Orient (120 guns) attached to the bow, and shook the Heureux (74 guns) warship tail following it.

A Tonnant starts bombardment to a Minotaur with the guns of a warship tail.
And by volley of an L'Orient, fatal damage is done to a Minotaur and a fire is generated.

The fire turns into a fire to the extent that it is beyond the crew member's of a Minotaur control, and serves as fate which will explode in the future and sinks.
The crew member of a Minotaur does not take an example by his situation, but also bravely opens a gun port lid and fights back.
In the inland side, the Spartiate of the France navy surrenders at last by a volley of a Goliath and the rake shot of a Vanguard which had the rudder shot. 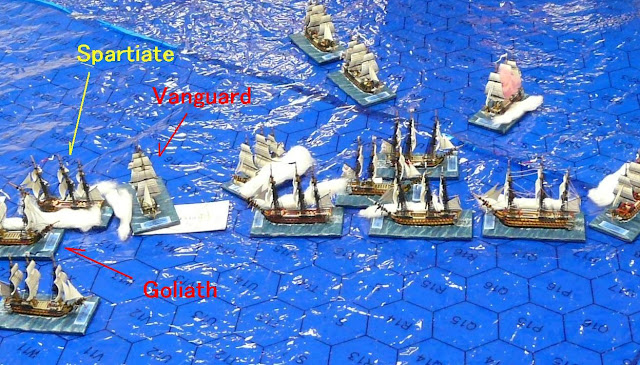